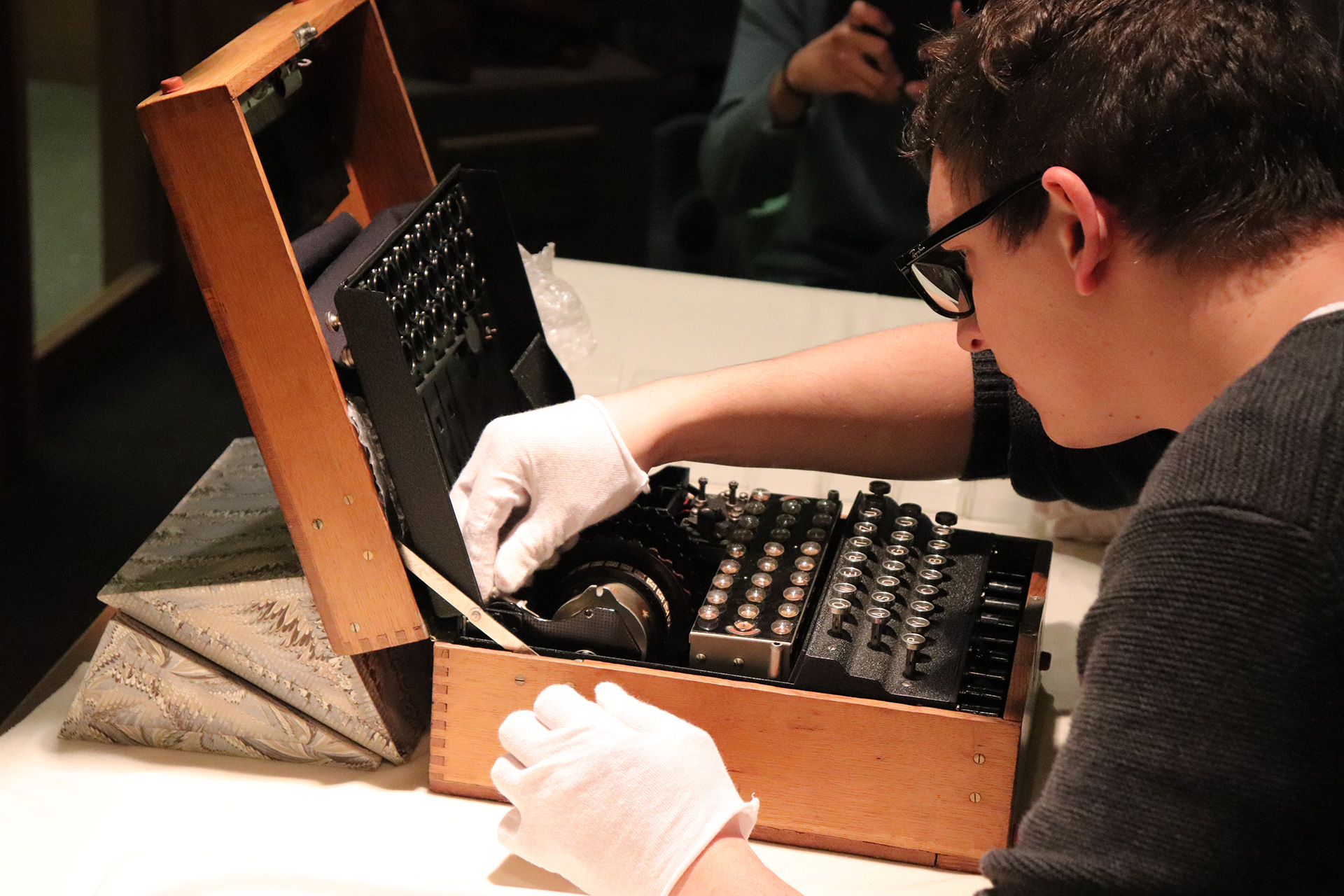 Today, I was part of a VERY rear event at the CMU Library. We (the FigLab team) were invited to the Fine and Rare Book Room (Hunt Library, 4th floor, CMU) to take on a major task – the disassembly of two Enigma machines. Since the machine is of extreme historical value, nobody should even disassemble an Enigma just of the sake of doing so. However, here we were presented with a necessity to disassemble them to understand the history fo the machines.

Both machines became into the possession of the CMU Library as a gift. However, they came with little knowledge of their prior whereabouts. For the historians at the CMU Library, that is a no-go. History is meant to be preserved and untouched but also to be explored to uncover the past. For this rare reason, we were asked to open two old Enigmas as the important parts of every Enigma is stamped with the serial number and the production stamp. Depending on the Enigma configuration, each of the 3 to 8 rolls is marked, the reflector at the end of the role is marked, and the Enigma housing itself is also marked.

Me while performing the first baby steps to understand the complexity of the Enigma machine. While a manual helps to get the first idea of how to open an Enigma, there are dozen of variations of the Enigma machine, and the fact that it is possible that no one opened the machine for over 70 years makes the task not easier. Thus, instinctive feeling, care, and patience were needed to get the rotors out of the rotor mount, see:

During a four-hour period on October 7, campus historians and researchers associated with History of Science and Technology at CMU (HOST @ CMU)—a cross-campus, interdisciplinary initiative to collect and preserve CMU’s historical contributions to scientific and technical development—assembled in the Hunt Library Fine and Rare Book Room to open up the Carnegie Mellon University Libraries’ two Enigma machines. Researchers had a rare opportunity to peek “under the hood” of these World War II-era machines to photograph their carefully-crafted interiors and to locate and record the serial numbers printed on their rotors. See much more in our stories and read the full article on library.cmu.edu.

After almost 4 hours of careful disassembling the machines, we pieced one back together while leaving one open to display the internals to the public. While this was one goal of the operation, the second was to understand which model and serial number each of the machines have. We are at this point certain about the serial number and that the ones in possession of CMU Library are an Enigma I and Enigma M4. However, this was a massive undertaking and only came together with the combined team effort.

Chris described his experience afterwards as: